From Writing to Wine: Part 1 – The Wines of João Afonso

I have loved my three short but sweet stints working vintage, especially at Cullen Wines in Margaret River, Australia. My timing was pitch perfect – the red grapes came thick and fast. Nature dictated what we did and when which, though physically demanding, was mentally relaxing – pointless making a schedule!

And how good is it to taste the fruits of your own labour? I still get a kick out of the fact I lees-stirred the Cullen 2007 Chardonnay, which was awarded the World’s Best Chardonnay at Decanter World Wines Awards in 2010.

And I confess, if I had my time again, I’d be sorely tempted to make wine and not just write about it. There and again, perhaps I should follow in the fearless footsteps of three Portuguese wine producers who are doing just that. Their stories are inspirational. Here is the first. Posts about Richard Mayson and Tiago Teles to follow.

João Afonso was born in Coimbra in February 1957. He studied sports science at the University of Lisbon and fell in love with his first career, ballet, when a ballerina introduced dance to the sport students. Within two years he was dancing around the world with the renowned Ballet Gulbenkian, where he spent 15 years. 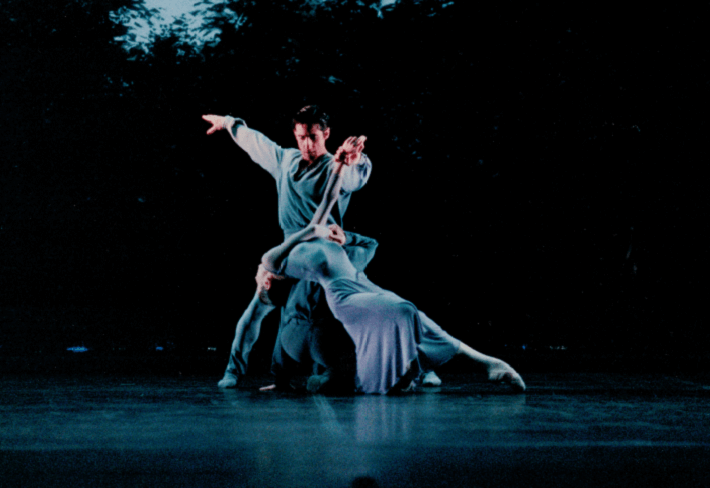 Afonso says he fell in love with wine more slowly since “dancers talk always and (almost) only about port de bras, cou-de-pied, pirouettes, grand jete… and dance performance. They eat and they drink not much, because they have to be in good shape every single morning”.

However, the seed of an idea about making wine was sown when, in 1983, Afonso’s wife gave him a copy of “Knowing and Making Wine” by Bordeaux University’s acclaimed Professor of Oenology, Émile Peynaud. He adds “my grandmother was a small wine producer in Beira Alta and, in a certain way, I was missing the old times when we’d got everything to eat and drink – homemade and things had another flavour and another taste (not always best, but always more genuine, without synthetic or easy flavour, I mean…)”.

Although he attended an intensive week’s study in winemaking at Anadia School, Bairrada in 1987 (Afonso has long had a passion for mature Bairrada wines), his high profile globe-trotting existence precluded the ballet’s principal dancer from seriously pursuing his interest in wine. It was only when his dancing career ended in 1993 that both knowledge and interest bloomed, especially having met Professor Virgilio Loureiro of the Instituto Superior de Agronomia in Lisbon (then winemaker at the Dao’s Quinta dos Roques and Quinta das Maias) and João Paulo Martins (the wine journalist).

By 1994 Afonso had started making wine from the family’s aged two hectare “Ribeiro” vineyard in Beira Alta. It was planted at the very beginning of the twentieth century when his grandmother was just a child. First a red and, in the following year, a white wine using old barriques supplied by Dirk Niepoort of Niepoort. Though Afonso was very happy with wines, which he describes as “outstanding (in my humble opinion)”, the beginning of the end of his first adventure in winemaking came when his oldest brother ripped out the old vineyard.

As luck would have it Niepoort and Loureiro had already introduced Afonso to Luis Lopes, the director of recently launched wine magazine, Revista de Vinhos and, as he observes, “since the winemaking was a tricky family affair (I have four more brothers…), I started with the easiest, and wonderful wine writing affair in May 1994”. He still writes for Revista de Vinhos and, between 2000 and 2008, wrote his own guide to wines in the Portuguese market. He has also written two wine books, “Entender de Vinho” and “Curso de Vinho”. However, he admits “[T]o write is, by far, not what I prefer to do. It is also an art but sometimes (many times) it has nothing to do with “the bright side of life”. For Afonso, the bright side of life is “to see and feel the beauty and the happiness”. A sensation which he vividly experienced in 2009 when he discovered a very old, small (3.9 hectare) vineyard in Reguengo / Portalegre for sale and decided that his mission was to protect and recover it. 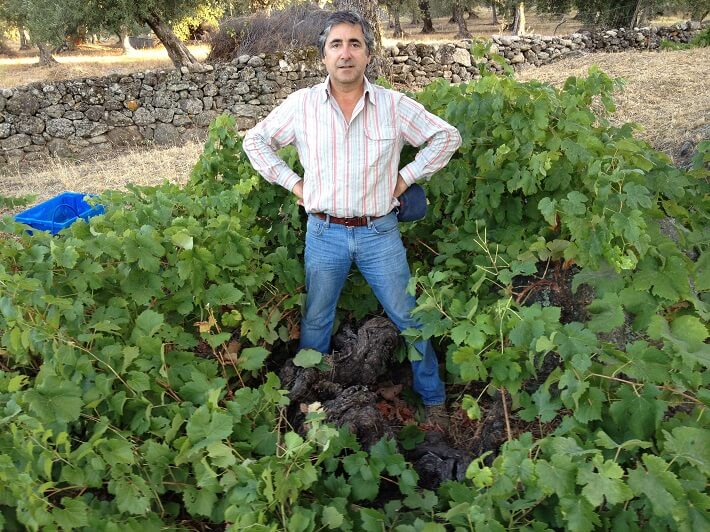 Why Portalegre? Afonso replies “I strike the north Alentejo for three reasons: the landscape is similar to Beira Alta (more beautiful and I feel at home), it is nearer [to Lisbon] than Beira Alta and, above all, it has old vineyards with old material (without nurseryman selection) – old varieties all mixed in the same plot of vine. If we can talk about “terroir” in Portugal, Quinta das Cabeças, I mean, the Reguengo might be one”. Indeed, somewhat auspiciously, after he had bought the quinta he learned that highly respected Alentejo winemaker Colaço do Rosário (the creator of Pêra-Manca) had identified the slope of Quinta das Cabeças as the best site for wine grapes in all Alentejo.

Within eight months Afonso had made his first wines, Equinócio ( a white) and Solstício (a red which he part ferments in clay amphora as was the regional tradition for centuries). Still, he claims never to have had a vision for the wine – “I’m not a winemaker” he says, “I just try to protect my vineyard and harvest the grapes to let them become wine”. Afonso’s confidence to let the vines do the talking stems from his belief in the vineyard – “I like to see it. I like to feel myself inside it. I don’t make wine, the vineyard makes it. I let my eyes choose for me”. 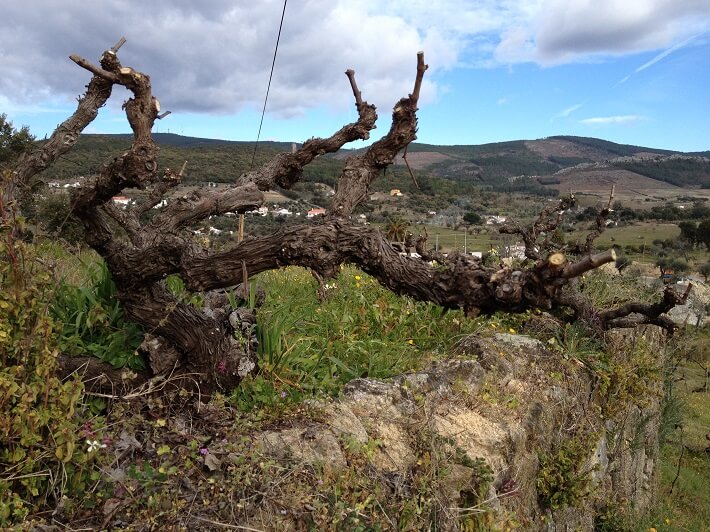 The non-interventionist approach starts in the vineyard, which is certified organic and cultivated biodynamically. For Afonso “understanding our estate, following Maria Thun’s lunar calendar and applying biodynamic preparations in homeopathic doses will result in even more genuine and intense wines”. Moreover, he swore never to use chemicals again after he sprayed his olive grove against moths in 1999 – “the smell that came out was so terrible that I feel if the olives trees had legs they would rapidly escape!”.

So has the rural idyll lived up to expectations? “Yes. Very much” is Afonso’s reply. Given that he is least inspired by “globalized or trendy wines” (wines with, Syrah, Merlot, Cabernet Sauvignon, Petit Verdot, Viognier, Sauvignon Blanc, Touriga Nacional…) which he believes have resulted in a lot of viticulture heritage being lost”, he is intensely proud that Cabeças has “proved that it is possible to make good wine with grapes that everybody despises”.

What’s more Afonso’s background means that he has been under no illusions about the challenges of selling his wine. He explains “writing about wine told me how difficult it is to sell wine, even very good wine and I have already had that experience with Beira Alta”. Additionally, writing meant that Afonso well understood the importance of having a different and genuine story and not simply making something similar to other wines – “I would be dead immediately”, he says. 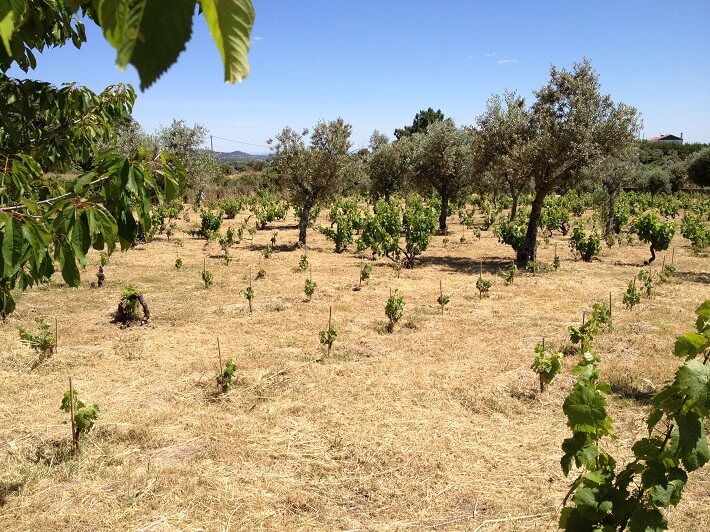 Rather, he expands, “[T]he unique possibility is to do something completely different, something good, and something hard to find”. Warming to his theme and looking at the bigger picture he observes, “Portugal is different. We don’t have it [the grapes and terroir] anywhere but here. And we make very good wines indeed… They are clean, good and they speak a simple, juicy and fantastic language for those who know how to understand them”. So why should we choose his wine, I ask? Because, he retorts, “it is a taste from a 1920’s Alentejo vineyard through the eyes and hands of a wine critic – an ex dancer”. Now that truly is a unique proposition. And, weighing in, might I add that Equinócio and Solstício are also excellent propositions for lovers of excitingly authentic wines with a palpable sense of place.