Arundel, around the lands of Pavia with Joaquim Arnaud

May 6, 2016 no comments in Uncategorized

Joaquim Arnaud is a name that has been around since 1883 and that has been passed on from generation to generation as tradition. He’s a descendent from an Alentejo family, from Pavia, documented there since 1515. A family that has always been dedicated to mounted, olive groves, vineyards, cereal cultivation and livestock (pigs, cows, sheep and horses). Their properties are located in the municipalities of Mora and Arraiolos, in the Évora district. In 2010, in order to maximize these resources, Joaquim Arnaud decided to create his custom brand, to which he gave his own name. His business goal is based on bringing to the market selected products with short runs, in which he combines the artisanal with sophistication. This is how producer Joaquim Arnaud presents himself, the wines that he creates in his cellar speak for themselves. In this tasting I only focused myself on the wines coming from Alentejo, more properly Pavia.

His wines express a will and an ideal and are made to his liking. This led him to move away from the scrutiny of the Comissão Vitivinícola Regional Alentejana. In this way he doesn’t feel cramped or trialed, he freeform creates his wines coming from the terroir of Pavia. His range of wines has been being broadened and we can notice that over there there is no rush to launch novelties or new vintages, the wines are only made known when Joaquim Arnaud believes that the time is right. So, even during the tasting, we oscillate between the strength of youth and the exemplars with tannins already educated. Of the five presented wines I decided to separate them into three groups:

Arundel Young 2013 and Arundel Petit 2012 are the example of youth and the fruit’s strength, both with a dose of austerity providing a very good energy to the set. Both share the same blend comprising of Aragonez, Syrah, Trincadeira and Alicante Bouschet, varying only in the time spent aging in barrel, 6 months for the Young and 9 months for the Petit. Wine with a fleshy profile, dense, with the Alentejo marking its presence with a quality bouquet emanating notes of plum, blackberries, spices and jam. Good freshness and purity of aromas in a conquering and breathtaking set. Wines asking for food nearby, grilled meats are the perfect match at this time. 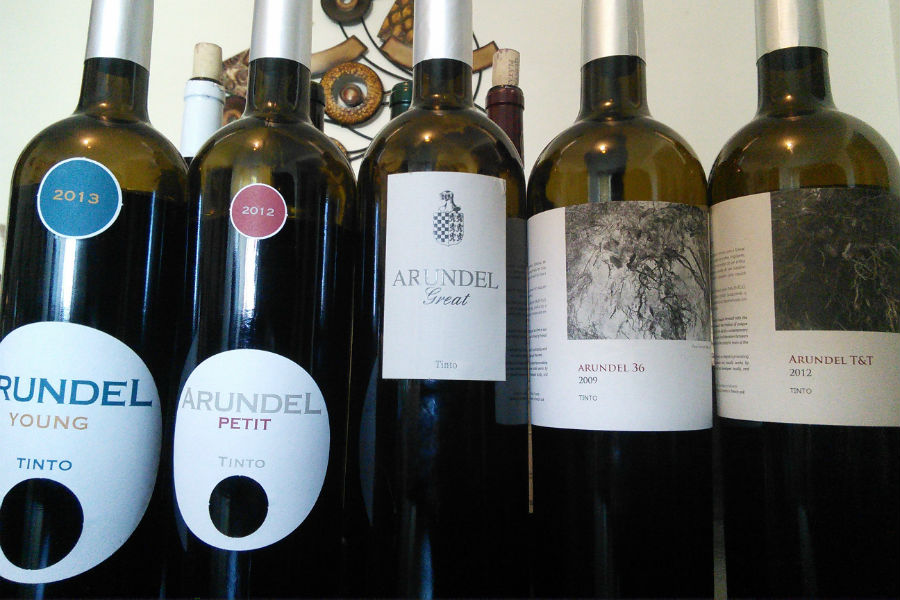 The wines resulting from the partnership with Trienal do Alentejo are more recent. The first release is the Arundel 36 2009, which results from a wine that was literally forgotten in the cellar and originated a the small amount of about 500 bottles, aged for 36 months in barrel. A serious and fresh set showing a mix of sweet fruit with red blueberry notes, strawberries and blackberries, a slightly floral fragrance with spice in the background. Great set harmony with a good mouth passage. A more open profile and less concentrated but creasing the entire palate with fruit flavors and spices. Ends broad, with a slight dryness in the gastronomic side that is the hallmark of this house.

The second edition goes by the name Arundel T & T 2012, a blend based on the grape varieties of the previous two wines that aged in barrel for 12 months. For the most curious T&T are the initials of the Trienal and Terranagro (production company of Joaquim Arnaud’s wines). Another example that combines finesse, freshness and fruit. In this case the fruit is less present giving place to a more floral and spiced side. The red and acid fruit, with tones of raspberries and blueberries appears in the background next to a light earthy/graphite. Mouth full of flavor, a slight dryness in the background, much cocoa, tobacco leaf and fruit.

Culminating with the Arundel Great 2008, 400 bottles of a wine that aged 12 months in barrel and another 24 months in bottle. A 100% blend of Alicante Bouschet. A sweeping red right from the first contact, such is the finesse and lasciviousness that it displays. Pure class, great harmony of an adult wine and ready to provide pleasure, very fragrant with juicy and fresh fruit on a huge quality bouquet where everything shows up well-defined. Not nipped by time at all, showing that it has managed to evolve for the better side. Like all of this producer’s wines shows a good Alentejo character, asks for table and shines brightly alongside some wrapped partridges.