August 14, 2015 no comments in Uncategorized

Among the many differences between men and women, the aesthetic of bodies is one of the funniest, given their being directly opposite. Ladies spend their lives terrified of not being fit; they may be thin, but mirrors tell them they look fatter than they actually are. Men, on the other hand, might even be bloated, but they always see Tarzan (played by John Weissmuller) in the mirror.

Another difference, but still within the same parameter, is age: ladies tend to notice years going by; they adopt different strategies in order to feel comfortable with their age. If it weren’t for the “sudden”, “unusual”, “inexplicable” and “unique” stitch, Gentlemen would think they are ten years old forever, and always fit for a football match – Cristiano Ronaldo obviously only kicks the ball around, comparing to regular old male Homo Sapiens sapiens.

I am no exception. When I met Tiago Cabaço, I thought he was young. So far, so good. The problem is it brought to memory an amazing meal at his mother’s restaurant, São Rosas, in Estremoz. Now, that memory has a flaw: I was there either on the first or the second day of its opening… in 1994!

Tiago Cabaço is 33 years old, so when I was there, he must have been kicking a football around, probably dreaming about turning into the next Luís Figo – to me, the best Portuguese football player ever, with due respect for His Excellency Eusébio da Silva Ferriera, a.k.a. Pantera Negra (black panther).

He told me his closest friends lived 2 miles away, so he spent most of his childhood with people who worked at the house, so they usually played football with him after a long day’s work. Of course, Tiago Cabaço is now a good 4 inches taller than me… Well, let’s get to the wine.

He started working when he was six years old, baling straw; he made 2000 escudos a day (10 euros, now actually 27.5 euros, after calculating the coefficient ratio of currency devaluation, a calculation supplied by the Portuguese Ministry for Finance).  When he was 14, he became a motorcycle racing driver and won a few championships, having given the activity up in 2003.

Vats © Blend All About Wine, Lda

He started working in the wine business in 2000, distributing his family’s production, Monte dos Cabaços, made in Herdade de Trocaleite. He thought there was a lack of references in their supply, so he decided to start growing wine. He made his first creation in 2006 using the 2004 vintage. 50,000 bottles were made at first; today they have 500,000, and they might possibly reach 600,000 this year – the cellar’s maximum capacity.

Casks © Blend All About Wine, Lda

“The wines are made in the field” – says Tiago Cabaço, who only wants a few simple interventions in the cellar. The sky is always the limit: grapes to make the Blog wines. Later, Susana Estebán, the oenologist, will decide what to use for what. “Acid has never been used to correct a wine” – she promises.

Vines © Blend All About Wine, Lda

She explains that she grew up in a property where they had no electricity, no gas, and no running water, but a vineyard was already there. The first seven acres of Alicante Bouschet, in 2006, grew into 203 acres of Alvarinho, Antão Vaz, Arinto, Encruzado, Gouveio, Marsanne, Roupeiro, Sauvignon Blanc, Verdelho (from Madeira), Verdejo (from Rueda) and Viosinho, the white varieties; the red varieties were Alicante Bouschet, Aragonês, Cabernet Sauvignon, Petit Syrah, Petit Verdot, Syrah Touriga Nacional, and Trincadeira. They make 17 references, including a white brand for Pingo Doce supermarket chain. There will soon be a new product other than wine… he asked that I keep it secret! I will tell you later.

© Blend All About Wine, Lda

The property’s grounds are rich in open-clay and schist (30%). The white grapes are mostly planted in schist-rich ground. They water about 60% of the plantation, but no more than twice a year. In “painter season” – when grapes change from green to yellow or purple – some water is supplied; this is also the moment when a few bunches are weeded out, because “if you do it sooner, the grape will grow more”, explains the producer. They might lightly water it again, when the colour change is complete.

The most symbolic brands are related to the internet: blog, .Com and .Beb (“.Drink”). Let’s get to it, then.

The white .Com 2014 was made from Antão Vaz, Verdelho (Madeira) and Viognier varieties. It’s a relaxed wine. Seeing as I’m not a very big fan of the Antão Vaz variety – and I rarely get any pleasure out of nectars it’s a part of – I don’t have much of an interest in it. But that’s my own problem. The truth is most consumers enjoy it; otherwise it wouldn’t be planted all over Alentejo.

Tiago Cabaço Encruzado 2013 was the first in the signature. The producer said he was very hesitant to name a wine after himself, but the pressure created by his fame made him cave. This wine, made from this white Dão variety, is a tribute to his father, who first planted it in Alentejo – as assured by the wine grower. It’s a peculiar wine, different from others made in its region of origin, but it maintains the refreshing character and transmits the minerality of the ground.

Tiago Cabaço Vinhas Velhas 2013 is a lot composed of Antão Vaz, Arinto and Roupeiro. It’s very refreshing, and ageing it in wood doesn’t harm nature, especially the tangerine. It’s quite a pleasant dance from sweet to bitter, ending in a soft dryness. 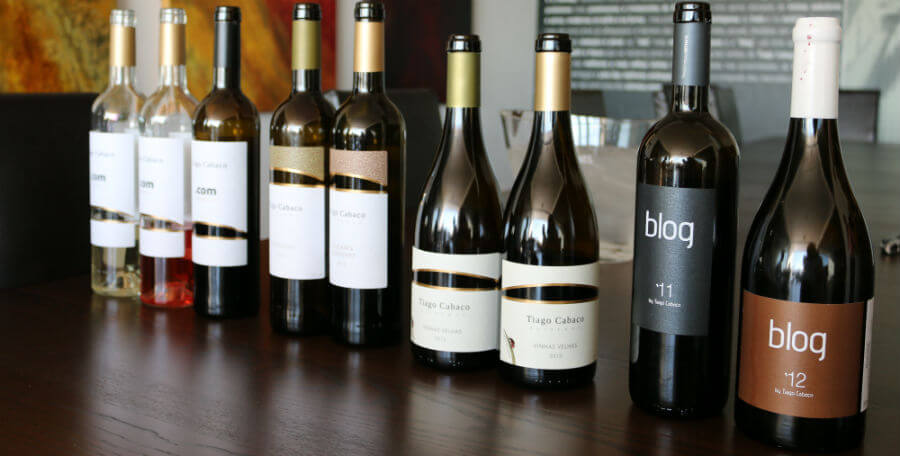 The .Com Premium Rosé 2014 is born from Touriga Nacional grapes, and it’s a good bet for those who enjoy rosé wines. It appears fruity and floral on the nose: lychees (a floral-scented fruit), lemon (peel), not very ripe blackberries, and violets – a typical scent in this Dão-grown variety, not always apparent in other regions. It’s mineral and dry in the mouth, and suggests delicate food, but it could come along just for a chat with friends.

The .Com Premium 2013 has the scent of the Alentejo-grown variation of the variety; closer to blackberry jam or red currant syrup. It’s soft, easy – very easy – to please. It results from the combination of grapes from Alicante Bouschet, Aragonês, Touriga Nacional and Trincadeira. I don’t recommend it for hot weather.

Tiago Cabaço Vinhas Velhas Red 2013 is very Alentejo. How can I define an Alentejo wine? By saying it’s from Alentejo! Beautiful!

Blog Alicante Bouschet + Syrah 2011 is soft and slippery, given its freshness. It isn’t delicate, it’s noble. It could be served at a marriage proposal in a fine restaurant. And it promises a long life, also what you wish for love.

Blog ’12 by Tigo Cabaço © Blend All About Wine, Lda

Now, Blog Alicante Bouschet + Syrah 2012 is the most complex; it needs more time before it can see the light of day (or night). It’s harsh, and strong… I would give this one to my doctor, after a 12-hour-long surgery… I haven’t been operated on.

Out of all the wines I tasted, Tiago Cabaço Alicante Bouschet 2011 was the one that latched onto me and didn’t let go. It’s complicated to define it in aromatic terms; it has fruit, chocolate, ore, vegetables and spices… not one of each… I could be here writing descriptions until tomorrow. The mouth is equally complex… I am an artsy person, and my imagination sometimes takes me to… I would take it to a secret meeting in a dark room, to summon ghosts. Some place made of stone, with heavy furniture made from excellent old wood from overseas colonies, heavy Renaissance tapestries, and 17th Century Flemish paintings. It isn’t heavy; it’s “symbolic and ritualistic.” It will live until I am walking around with a cane. It’s polished, dry… A great find!