Blood in the Winery It’s so sensual – Coupe vs Flute

Of Paradox and Patrimony: An Interview with Marta Soares, Casal Figueira

“Vital is my face,” says Marta Soares of Casal Figueira.  Together with her late husband, António Carvalho, Soares has not only rescued this humble, autochthonous Lisboa white grape variety from obscurity, but also shown it in a dazzling light.

So how does she describe Vital?  The words come tumbling out.  After all, this deep thinker knows herself. “Productive, strong, dynamic.  A lover of time and space.  Wild like the vineyard.  Fresh and austere, but also complex.  When you start to know it, you go into that world.”  Over a luminous bottle of Casal Figueira António Vital 2013, Soares privileged me with a glimpse into her world of paradox and patrimony.

For, “born in cement,” Soares did not set out to make wine like Carvalho, whose family had grown grapes for generations in Vermelha, near Torres Vedras, in the Lisboa wine region. Rather the former student of the Faculty of Fine Arts, University of Lisboa had found her identity in art.  When she met Carvalho in 1999, Soares was on the brink of going to New York to further her career, initially with the support of the Luso-American Foundation and, long term, through the Fulbright Program who had approved her portfolio; she just needed to complete the paperwork.

Though she had enjoyed success with her exhibitions she reflects, “I was too young I think and soon came to pressure myself; I knew I needed something to change.”  Soares asked friends if they knew of a space where she could be quiet and alone to think before heading off to the States.  They told her about “a crazy friend with a farm” near Torres Vedras who probably had the space for her to set up a studio.

This ‘crazy friend’ was Carvalho, who, having studied with French vignerons at Montpellier’s École Pratique Agricole, was ploughing a lonely furrow making terroir-driven, quality wines on a 50 hectare family-owned plot (Casal Figueira), 15 hectares of which he planted to vines in 1990.   As if this what not departure enough from Lisboa’s quantity-focused tradition, his vines were cultivated biodynamically and included French grape varieties Marsanne, Roussanne, Petit Manseng and Semillon in addition to local grapes Fernão Pires and Arinto.

Soares vividly recalls, “when I got there, I saw this obstinate guy in a hat in the vineyard pruning the vines one by one in a repetitive gesture every day, from early in the morning until the end of the day.  He would think about each vine and treat it as a separate sculpture; it was very close to the work of an artist – you have to model it [the sculpture] each day, every year, then it will become what you want it to become.”

When she and Carvalho shared the fruits of his labour at the end of those long days, she found the answer to her burning question about “what drove this man?” Describing his objective, the wine, as “so strong,” she says, “you could appreciate all the work.”  Soares also realised that his “litany” of pruning with the goal of making wine paradoxically appealed to her because “it seemed relaxing” in contrast to the life of an artist where “you just build things day after day but never know exactly where you are going.”  She elaborates, for a vigneron, “you are not in command because nature dictates what time you spend while, every day, an artist must decide if they are to paint or not…everything is your responsibility.”

On the other hand, she observes, where you work with nature and organic materials (the opposite of an artist working with artificial materials “so they can control everything”), you have to be prepared for whatever happens.   In Carvalho she came to see that, “if you are fearless, you can see it [working with nature] as an adventure and re-discover passion every day.”

These paradoxes and points of departure from her own work interested Soares.  Falling in love with Carvalho and, with “so much to learn in front of me…especially in relation to practical doing,” she gave up on her New York plans to stay with Carvalho and, when she could, help him in the vineyard and cellar. 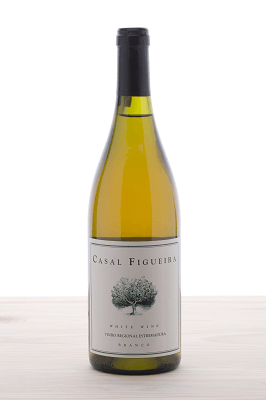 Conversely, she says her good will and energy about his work gave him the strength to continue despite the fact people didn’t believe in the style of his wine.  It was Soares who came up with what she describes as “the first label in the language of Casal Figueira.”  The white label bears the name of the estate, description “white wine” and depicts her sketch of the fig tree outside the cellar.  She explains “it was about simplicity – drawing attention to the content not form.”

Still, ahead of their time, Carvalho and Soares were unable to make a success of the business and entered into bankruptcy in 2003.  Carvalho’s family re-possessed the farm during which period the couple worked for acclaimed Spanish winemaker Telmo Rodrigues on a project to recover old Godello vineyards in Galicia.  When Carvalho’s father died the following year, they returned from Spain and worked the farm at Casal Figueira once more until it had to be sold in 2007 to pay off family debts.

Soares says this was a hard time because they knew the farm would eventually have to be sold, but “it was the rising of ‘new’ Casal Figueira: fearless, stronger than ever.”  Why?  Because Carvalho recognised “you can only make great wines if you stick to the vineyard and stay there with it.  You need to be at home. Only that way you’ll understand it and make the best out of it. That’s what biodynamic is in its essence: to stay there and understand it.”

Which is why the couple then decided to stay in Lisboa and seek out its autochtonous grape varieties. In contrast with the year in Spain, Soares says “[I]t was where we both could stay every day. Loving each other, loving the vineyards, loving our children. To love something needs everyday care.”  What’s more “[O]ur region was also where we had already some knowledge on climate, soil, behaviour of plants, insects and natural fallibilities.” 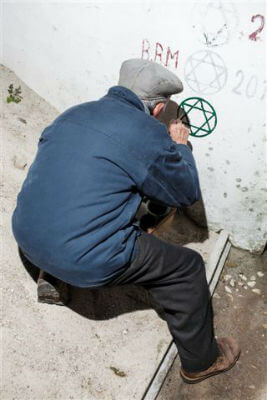 The search took Carvalho back in time, to the buggy trips with his nanny up onto the north side of Serra Montejunto to visit with her relatives, farmers.   And so it was that the couple came to find the source of Casal Figueira’s acclaimed Vital wine – four plots of 50-100 year old vines on limestone at 250-400m above sea level, which is uncommonly high for Lisboa. These plots were owned by (and named after) the cousins of Carvalho’s nanny, Acacio, Cremilde, Humberto and Pedra who, in addition to selling grapes to the local co-operative, had always made their own wine from these vines too. Describing them as “very oxidative, very strange,” Soares smiles inwardly with pride when she regales how “Antonio had the vision to understand the potential of the grape variety.” 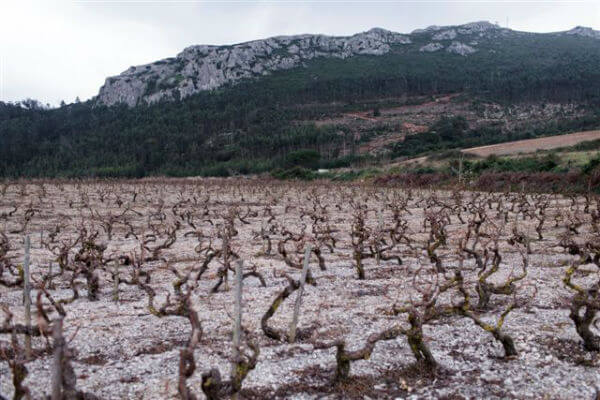 It was, Soares adds, the perfect project because, living nearby and with cellar space a stone’s throw away, they could achieve their goal of obtaining “a very clear expression of the grapes.”  She points out “proximity is the main word.  If there is a big distance between the vineyard, cellar and where you live, there is a lack of quality in life and in the freshness of grapes. If it takes hours to get to the vineyard, you will not stay long, then you will hire people.”

However, the couple’s travails were far from over.  In 2009, Carvalho collapsed and died from a heart attack while treading grapes.  He was just 43 years old.  Mid-harvest and with two young children to support, Soares tells me she had only three seconds of hesitation about carrying on with the project.  A hesitation, she adds, which stemmed only from wondering if she could live up to the man she describes as “an incredible winemaker…the best in all of Portugal.”

I ask if continuing with Casal Figueira was a way to honour António’s vision and stay close to him? For Soares, the purpose was much higher.  She describes it as “an epiphany of living which was not about art, but about practice…about relating directly to things you do, refusing theory and going hands on” – a different approach to life which she learned from Carvalho.  Despite everything, she can look back on his death and describe it as “a happy thing because he gave his life for something he believed in and it was his heart, not the winemaking or the land which killed him.” 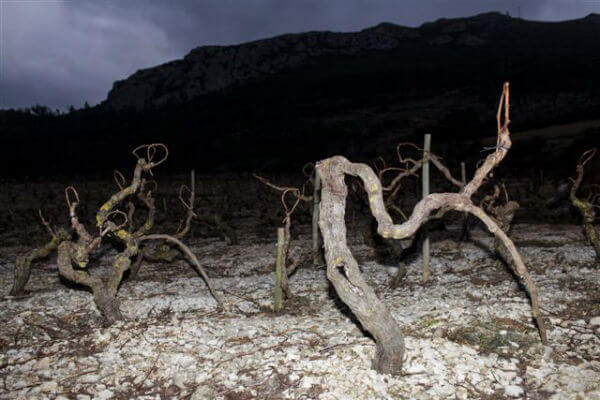 “New Vital vines are propagated using the layering (mergulhia) technique which Soares observes ‘is incredible, because my paintings are made out of a layering process which I called “matrixes”.’ A cane from an existing vine is buried into the ground next to the “mother” vine to create a new vine; the connection between the two is severed when the new vine develops its own root system.” – Photo Provided by Marta Soares | All Rights Reserved

Of equal motivation is another higher purpose, which is to preserve Portugal’s cultural patrimony of vines.  For Soares, this transcends wine itself, which she describes as merely “a necessary step to have an expression of vineyards.”  “Imagine,” she says, “when you farm 100 year old vineyards how many people have died and yet the vineyard goes on.  Vineyards are a register of time and time is culture – we should take care of this.”

Though she recognises that “this cultural patrimony has incredible value in Portugal,” Soares is keenly aware that unlike France, “where art, wine and literature are together,” high culture and agriculture are completely separate in her country.  She passionately believes that there should be a connection between “what is basic in life – agricultural production – and what’s happening in art.”  Instead, she laments, “we are looking elsewhere, outside, never looking inside, never looking here.” 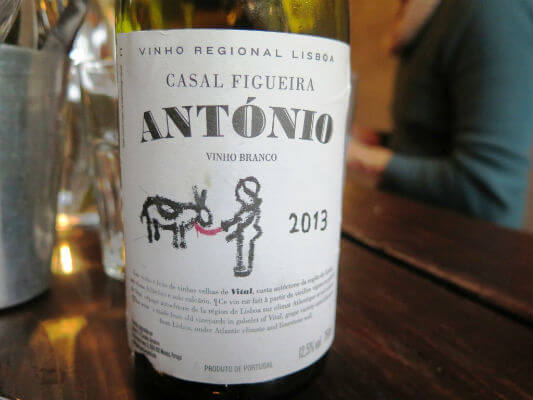 I can certainly relate her comments to Portugal’s recent winemaking history, where you could be forgiven for thinking that only a handful of native, not necessarily local grapes, warrant attention.  However, I am pleased to see a new generation of producers like Carvalho and Soares coming full circle to embrace the best of tradition.  Not just autochtonous grape varieties but also viticultural and winemaking techniques.  Just look at Baga Friends, or Rita Marques’ Conceito Bastardo, André Manz’s Jampal and the work of António Maçinta in the Azores to revive local grapes Arinto do Açores and Terrantez do Pico.

Returning to Vital, which Soares alone champions as a single varietal wine, it represents not only her face, but also “a richness in authenticity…something so simple that it has a pricelessness.”  She concludes “that is what I love about Portugal and for me it’s what Vital represents.”