Colares – The Most “Ridiculous” Wine Region in the World

Ridiculously awesome that is! I’ve been curious about this little wine region in Lisbon ever since I tasted one bottle during harvest in Douro back in 2008. During one wine filled dinner I tasted my first sip from Colares. It was amazing. I didn’t remember which producer it was nor the exact vintage. I just remember it was old. That was until I found a long lost picture of me holding that very bottle in my hand. Don’t be alarmed, that picture was taken 6 years and 20 kilos ago, but I assure you that’s me in the picture. But we will get back to that wine later. 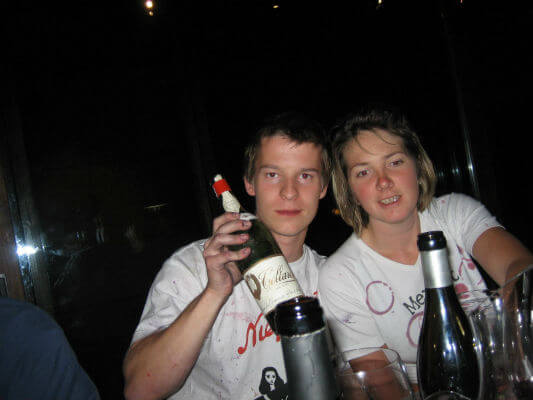 Drinking Colares in 2008 – Photo by Ilkka Sirén | All Rights Reserved

The region has a long history and it is the second oldest demarcated wine region in Portugal dating back to 1908. But the history of wine making in Colares goes way way back to the days of the Roman Empire. But it was King Afonso III of Portugal who actually commanded people to cultivate vines there. I can picture him as a Game of Thrones type of a figure, drunk, screaming “MORE WINE!” while waving his sword, kind of like Tyrion Lannister. So, wine has been important to the region of Colares a long time. In the end of the 19th century the wine bug phylloxera destroyed pretty much every vineyard in Europe, except Colares.

The vineyards in that area were cultivated on sand dunes very close to the sea and phylloxera, that sneaky little bugger, does not like beaches and the vineyards of Colares survived this vinous catastrophe. While the rest of Europe was freaking out, grafting and burying toads under the vines because they thought it would help save what little they had left, Colares was doing fine. I mean people were battling these microscopic insects with vivisepulture of amphibians! Desperate times call for desperate measures, I guess. But for Colares this was like winning a lottery. The world was suffering from an extreme wine shortage and Colares had the golden ticket. Supply and demand – BOOOM!! I’m sure that there must have been a moment when Colares had a good trajectory to become one of the greatest wine regions in the world. But that was not meant to be. 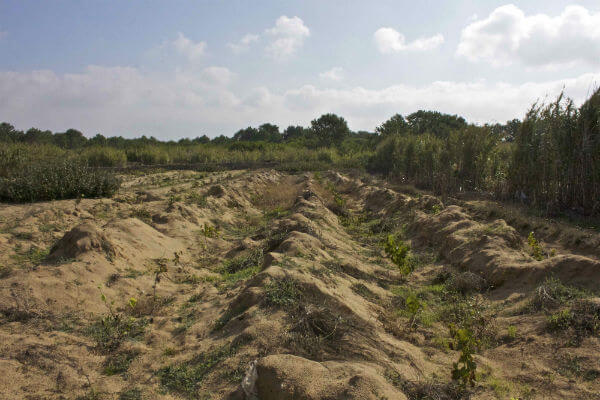 The region has gone from being the center of the wine world, almost, to the verge of extinction where it is today. It was only when I had the chance to visit Colares that I understood why it never could be a blockbuster region. For sure the region deserves much more attention but it will never be a “mainstream wine”. It’s just too damn difficult to cultivate grapes there. It’s extremely labour intensive. I visited a bunch of vineyards this harvest that were not more than 300 meters away from the Atlantic ocean.

The vineyards are surrounded by walls made out of straw and the vines are planted in sand trenches which makes the vineyards look like a scene from the movie Dune by David Lynch. The vines are sprawling wild on the ground and when the grapes start to form they will lift the branches with these canes to prevent the grapes from rotting. 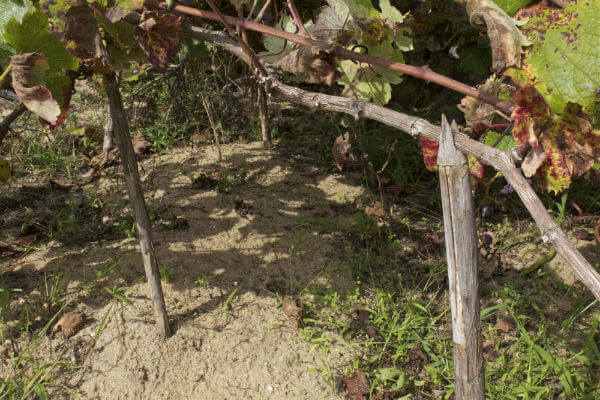 When the harvest finally does come you can only imagine how back breaking it is to pick these grapes. You can forget about mechanisation unless you find a way to strap a bunch of grape pickers behind a dune buggy and drag them around the vineyard without hurting them. 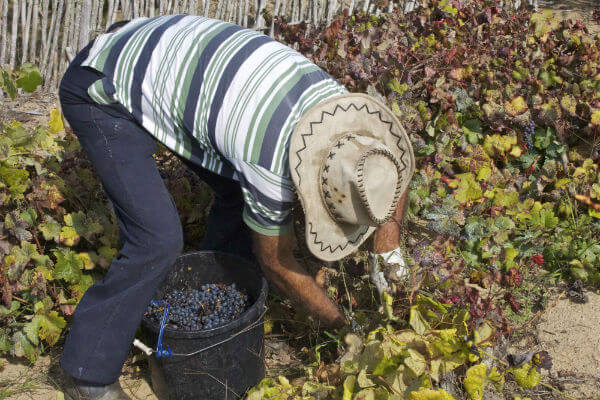 Why make things difficult then? Well, the wines made for Colares DOC have to come from sandy soil near the beach and they have to be ungrafted. However if you want some EU subsidies the vines have to be grafted. This viticultural Sophie’s choice does not make things any easier. 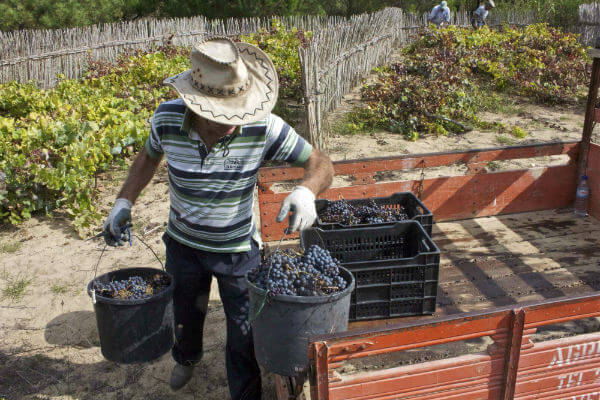 Loading the Tractor – Photo by Ilkka Sirén | All Rights Reserved)

After going through the vineyards it was time to taste these wines. I went to one of the old-school cellars Adega Viuva Gomes for a drink or two. They have been around since 1808 and their wines are sought after by Colares fans all around the world. 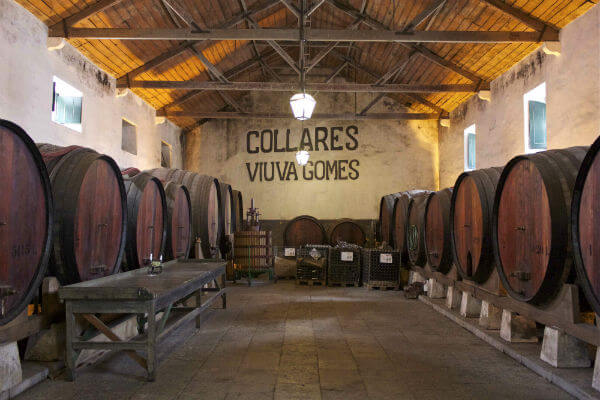 In the beautiful cellar of Viuva Gomes we tasted a range of wines from the different local producers. The bottles varied in style and age but one wine really caught my eye.

Viuva Gomes “Collares” Tinto 1934
Let me start with saying that this is not a fortified wine, I repeat this is not a fortified wine. Which makes the vintage even more astonishing. This is a red wine made from ramisco, the king grape of Colares. A fairly uninteresting grape variety outside the region but in Colares it produces wines with great personality and remarkable longevity.

The year 1934 was the year when Adolf Hitler started his reign and it’s also the year when Bonnie and Clyde were shot dead deep in the pine forests of Louisiana, just to give you a little context. It’s old. By the time you lay your eyes on this wine you will know that it’s not exactly from this decade nor this century. The light brown hue promises something matured, something that has stood the test of time. On the nose you get some beautiful earthy aromas with hints of cherry, crushed rocks and a touch of this volatile minty character.

This is a wine I like to call a “Houdini wine”. It keeps constantly evoling and changing in your glass. Every time you put your nose in the glass it’s a bit different. When you taste the wine you understand why some people are really fanatic about these wines. Just pure structure! Kickass acidity with layers, upon layers, upon layers of flavour. There’s also this beautiful salivating effect. A bit of that sea salt-like kick that makes your mouth water. A truly mind-boggling wine that is a great testament for the great potential of Colares wines. 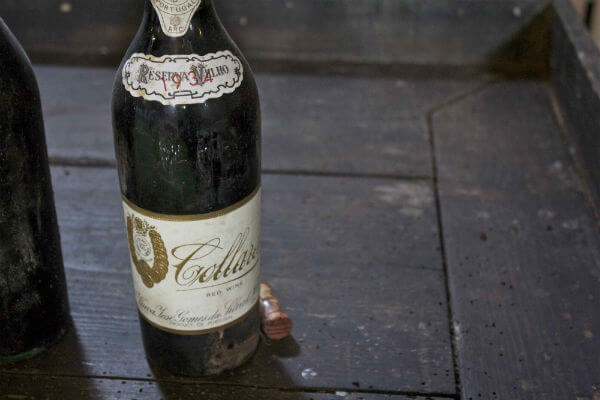 So, back to the wine this whole thing started with. The Colares wine I had in 2008 when I was in Douro. While writing this post an old picture from that night resurfaced and after some enlarging and enhancing the picture, I found out that the wine I had in 2008 was in fact the very same Viuva Gomes Tinto from 1934. The same wine that got me interested about Colares wines and reaffirmed my belief that Portuguese wines can age like the best of them.

Now, I don’t know what will happen to this peculiar little wine region in the future. It really can’t get much smaller than it is without disappearing from the face of the earth completely, and I don’t think it will. There seems to be a newfound enthusiasm within Colares wine making scene. There is young guys like Hélder Cunha with his Monte Cascas wines that are producing some really tasty stuff and bringing some new blood to the region, so to speak. As long as there is talented winemakers like him and all the others who are currently making wine in Colares and preserving what can only be described as one of the most ridiculous yet absolutely fascinating wine regions in the world, there is hope.