Blood in the Winery

Someone once said – a famous politician, writer or military man…- that a man without enemies is worthless, give or take. As far as I know, I have no enemies, so I’ll try to get a few with this chronicle. The motto has the color of blood.

Red Vinho Verde is a wine «product» – I despise the usage of the word on beautiful things such as wine, therefore I’m using it purely as a resource and not as an offense – appreciated by many, as many think to appreciate it (they probably have never drunk it), others claim to like it just to be nice and others abhor it.

Myself, I’m in the group of those who abhor red Vinho Verde!

But bear in mind: I fully respect tradition, ethnic dimension, regional truth and character. Red Vinho Verde musters all these aspects. Character is something that this Entre Douro e Minho wine does not lack of. While oenophile, I’m hoping it lasts for many and long years, keeping the features its enthusiasts appreciate. But it’s not for me.

The worst that could happen – to this «product» as to any other with authenticity – is the loss of identity, shaping to trends or crowds. I ask the winegrowers to let the red Vinho Verde continue as hitherto, not yielding on that virtue, the «truth». 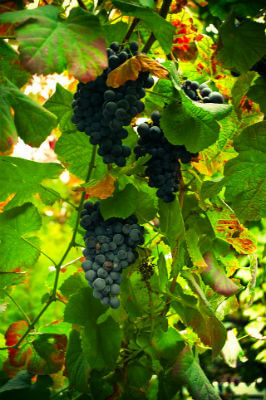 I’m 45 years old and I ‘m part of a generation – perhaps the last urban – that had wine at the table: a glass at lunch (during the work week and the weekends), a glass at dinner, at parties… As a child I never drank, obviously. However, wingdings were made with wine and not with shots or distillates – only consumed in discos.

Alexandre Dumas (Father) was, in addition to exceptional novelist, a renowned restaurateur, with published work which should be read by people into the food contents. He asserted that food from a specific place should be matched with a wine from the same source.

Gastronomy is culture, just like the arts, or the work habits or the costumes. To me it makes perfect sense. Therefore, I can see why some Entre Douro e Minho dishes’ should be matched with its wine.

But to like or consider good is something else entirely different. Even what’s «good» is sometimes debatable. Red Vinho Verde has a tremendous acidity, it’s vigorous, and marks the mouth. This is one of those cases where «good» translates into a great personality, which leads to parallaxes of understanding. Heterodoxy, is neither just a virtue nor only a defect. It’s not consensual: there are those who are passionate about it, those who enjoy it as a precise and logical pairing to the food from its region of origin, and those who lack affection for it, such is my case… I dislike the grape variety vinhão and, even in Douro where they name it sousão, its presence does not fit me nicely. However, I advocate for it to remain as it is, because it’s authentic. Drank by those who like/understand it, dispensing those who feel itches.

Tradition is what it is and also the characteristics of what nature provides. One day I complained to a fellow gastronome over a famous coffee served in a no less famous «coffee shop», in Lisbon. I was scolded because that’s «the best» mountain coffee there is. Well, well… What’s the point of being «the best» if it’s unpleasant?

What’s such thing of being «the best»? What does the «academy» or people’s ancestral wisdom or personal taste say? It’s all relative. My friend is right, at a particular point of view: we need to know what it is to be able to understand it.

Madeira wine suffers of all punishments one can inflict to a wine. Who tastes it, whether casually or in a contest, should know that it’s a Madeira because the standard has to be that. You can’t demand of it what it is not.

A F1 car is better than a WRC one or a Dakar one? Each is the best in its category, incomparable. But there’s good and bad in F1, WRC and Dakar.  Just like in wine. There are good young wines and full of steam, like the red Vinho Verde.

Lately, there have been winegrowers of reference dedicating themselves to red Vinho Verde production. Nonetheless, I stand on my «disliking». There’s nothing to do. I’ll always be an heretic to those who enjoy it.

The peremptory assertions – always, never, all, nothing, etc. – are dangerous to anyone who utters them, but there might be an exception, or two or 20, just to annoy the verdict. May be the case.